Snap Inc. Gets Snapped Up

Take a picture of me with a… Snap! That’s right. Contrary to keeping a collection of those precious moments, (which is exactly why you would want to take a photo or video in the first place), your pictures or videos are gone with the wind within a few seconds of being seen. Beloved by tweens, teens, and twenty-somethings, this disappearing messaging app called Snapchat, powered by brand new billionaire brainiacs Evan Spiegel and Bobby Murphy at Snap Inc, rocked the town with a bang on the New York Stock Exchange following its Initial Public Offering (IPO). Note: The Snapchat stock symbol is NYSE: SNAP.

‘SNAP’, the NYSE ticker symbol representing the company as it launched its sale of shares to the public on Thursday was as apt as its ticker can get as investors flocked to purchase what seemed to be the hottest stock trending on Wall Street. Exchange data showed that orders swelled to more than 10x the number of shares available for sale. The stock price of the photo-sharing app was driven up to US$25.20 per share prior to its opening of US$24 per share. That’s 48.2% higher than the US$17 it sold to institutional investors.

Buying Snapchat Shares just got more expensive than anyone ever imagined, giving the company a boost in valuation of billions above its highest previous projections. The company was initially seeking a $25 billion valuation, and has already raised US$2.4 billion after its sale of 200 million IPO shares, making it the next largest in scale since Chinese e-commerce company Alibaba’s IPO in 2014. With the new, higher share prices, Snap’s valuation currently stands at $34 billion. This however pales in comparison to Snap’s closest rival, Facebook who is now valued at $393 billion. 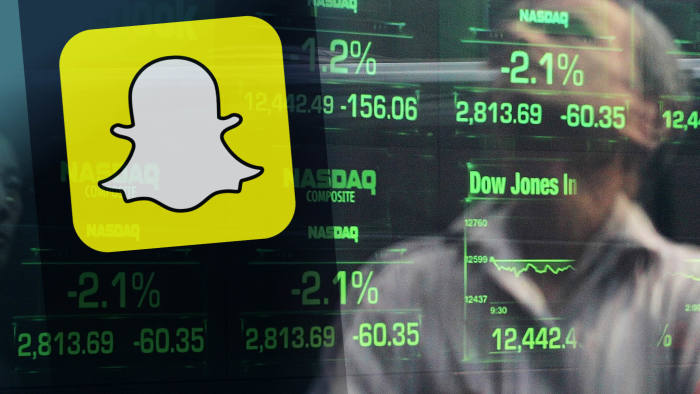 Red warning signs are flashing especially when a stock skyrockets close to 50 percent in a day, even on a euphoric first day of trading. Critics are likening the Snapchat story to Twitter, who has lost nearly two thirds of its value standing currently at just more than $10 billion since going public in November 2013 at a high of $40 billion. Not forgetting how Twitter’s stock price rose almost 73% higher on their opening day, leaving Snapchat’s 41% rise a far cry from the latter. No doubt Snapchat has amassed a much bigger audience than Twitter, with almost 158 million daily active users as compared to Twitter’s report of 307 million monthly active users last quarter.

Despite Snapchat’s huge user base, growth numbers have plateaued in the last quarter of 2016, attributing the cause to increased competition both domestically and internationally in 2016 since many of their competitors rolled out products with similar functions to Snapchat such as Instagram Stories.

As with any app out there in the market, user growth is vital for luring in advertisers and capturing a steady stream of revenue. It is also easy for current Snapchat users to shift their attention to other similar platforms considering how the majority of its user base aged 18-34 are not exactly brand-loyal. Coupled with tapering growth numbers and the company’s struggle to expand its daily active audience outside of developed countries without the high-bandwidth-capacity cellular networks the app requires, it is difficult to ascertain whether Snapchat can sustain its momentum.

Another question to ponder over is why do burgeoning tech companies as such who claim that they may never achieve or maintain profitability rake in “wads of cash”? In fact, Snap reported a net loss of $515 million in 2016, compared with $373 million in 2015 and a negative cash flow of $678 million in 2016.  Bloomberg’s Shira Ovide noted on Twitter that “it’s certainly notable that the cost of revenue for Snapchat was higher than the revenue itself”, as the company ramps up on spending and hiring.

Unlike its rival Facebook who recorded a positive 27% net income margin the year before its respective IPO date, it is actually made factual that the six-year-old company Snap lost more than half a billion US dollars in the months following up to its IPO. Yet, why are so many investors still buying into the Snapchat story following Twitter’s and Groupon’s lackluster performances after their IPO? Or are they just merely riding on the hype thinking this is going to be the next great tech stock like Google or Facebook?

A light at the end of the tunnel?

It is irrefutable that Snapchat is indeed a brilliant social media app and there is more to Snapchat than the app itself. The company recently launched the Snapchat Spectacles that are sold online and also made available through Snapchat’s “Snapbot” pop-up vending machines. Nicknamed “Specs”, these are essentially sunglasses that Snap by tapping a button on the wearable and voila! You are on your way to take a 10-second video Snap. By syncing one’s Snapchat account with Specs, it will automatically import videos to Memories in Snapchat which one can then send to friends or post on Story. The company is even rumored to be working on a drone to take photos and videos from above.

It is still better to take caution and remember that not every social media startup will turn into a unicorn and be “the next Facebook”. For now, no one knows how the share price of Snap will swing. It might continue skyrocketing, or people might be able to snap it up for a bargain in a few months’ time. The bottom line when it comes to investing would still be to keep your emotions in check and know when it’s time to get out of a stock!

The Ultimate Guide to Value Investing

I started my journey into the world of value investing nearly a decade ago. Since then, I’ve read everything I could about value investing – from popular works like Warren Buffett’s Berkshire Hathaway Shareholder Letters, to hidden gems like Crist on Value. I’ve also listened to countless interviews with value investing legends like Warren Buffett, Charlie Munger, Howard Marks, and Leon Cooperman; I’ve had discussions with experienced and successful investors; and I’ve honed my own skills in the stock market. Now, I’ve packaged everything I know into one amazing e-book: The Ultimate Guide to Value Investing.