Value Investing: Everything You Need To Know

What Is Value Investing?

Value investing is an investment philosophy that consists of buying stocks that are trading for less than their intrinsic value.

This simple yet effective investment approach became famous thanks to the incredible performance achieved by its proponents, like Warren Buffett, Charlie Munger, or Seth Klarman, to name a few.

For example, Seth Klarman’s hedge fund generated a compounded annual return of 20% from its inception to 2008, beating the market to a large extent. (Source)

Whenever you are dealing with portfolio construction or investment strategy, you have to face the ever-present dilemma: what’s better between value and growth stocks?

Before we answer the million-dollar question, let’s review what the difference between the two is.

Value stocks are stocks that are cheap relative to their fundamentals and have lower valuation ratios than the market. The most used valuation ratio for categorizing value stocks is the price-to-book ratio. Indeed, the Russel 1000 Value Index is composed of companies with lower price/book ratios.

Growth stocks are stocks with higher forecasted and historical growth rates. For this reason, they are much more expensive than the market.

In the past century, value stocks usually outperformed the market.

This long period of underperformance has led many investors to believe value investing is not effective anymore. However, there is nothing strange at all in that.

Indeed, despite beating the market in the long run, picking stocks with a low P/B ratio results in long periods of underperformance in the past too. In the backtest I mentioned above, value stocks beat the market 77% of the time on rolling 10-year periods. 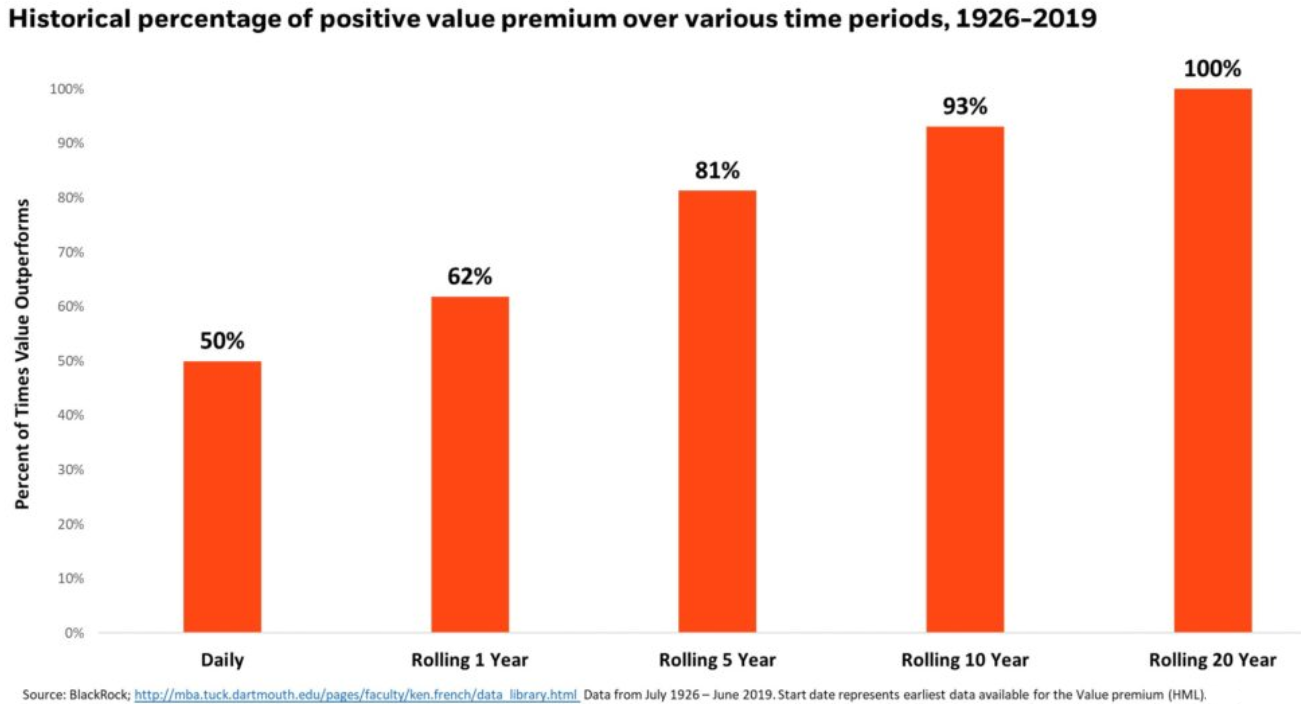 The results tell us that value stocks tend to outperform growth stocks in the long run, but that it is completely normal for them to underperform over some periods.

What’s more, when that happens it is most likely because growth stocks become more expensive than ever. Indeed, that’s exactly what happened in the past 10 years. Growth stocks’ strong performance was mainly driven by multiples expansion, rather than fundamentals, as it was with the dot-com bubble.

However, a Bloomberg research shows that every time that the valuation of the growth index is relatively high compared to its value peer, the first one subsequently underperforms. As you can see in the following graph, a wide gap in the pe ratio between value and growth stocks is generally followed by the growth index’s underperformance: