1. Work for the person or company you admire the most

Warren Buffett says that he often gets asked the question: “Who should I go to work for when I graduate college?”

“I’ve got a very simple answer… the real thing to do is to get going for some institution or individual that you admire. I mean it’s crazy to take in-between jobs just because they look good on your resume, or because you get a little higher starting pay.”

Why would you want to be around the people you admire most? Here’s a lesson Warren Buffett learned spending part of the first summer after graduating college fulfilling his obligation to the National Guard:

2. Copy the habits of the most successful people you know

Here’s another thought exercise that Warren Buffett had a class of MBA students play: Imagine that you can pick any one of your classmates and you could get 10% of their earnings for the rest of their lives. Who would you pick?

“What goes through your mind in determining which one of those you would pick? You can’t pick the one with the richest father, that doesn’t count. I mean, you’ve got to do this on merit. But, you probably wouldn’t pick the person that gets the highest grades in the class.

Now, imagine that you can sell short one of your classmates – you have to pay 10% of what they do. Who would you pick?

“Again, it isn’t the person with the lowest grades or anything of the sort. It’s the person who just doesn’t shape up in the character department.

We look for three things when we hire people. We look for intelligence, we look for initiative or energy, and we look for integrity. And if they don’t have the latter, the first two will kill you, because if you’re going to get someone without integrity, you want them lazy and dumb. I mean, you don’t want a spark of energy out of them. So it’s that third quality. But everything about that quality is your choice.”

Now look at those two people. Wright down the qualities of the person that you’d like to buy 10% of and ask yourself, “Is there anything on that list I couldn’t do?” Buffett says there won’t be. Now look at the person you sell short and look at those qualities that you don’t like. Do you see any of those in yourself that you can’t get rid of? Buffett concludes:

And if you follow that, at the end you’ll be the person you want to buy 10% of. I mean that’s the goal in the end, and it’s something that’s achievable by everybody.”

3. Invest in yourself first

Warren Buffett explains how Charlie Munger became successful long before the duo ever even met each other:

“Charlie, as a very young lawyer, was probably getting $20 an hour. He thought to himself, ‘Who’s my most valuable client?’ And he decided it was himself. So he decided to sell himself an hour each day. He did it early in the morning, working on these construction projects and real estate deals. Everybody should do this, be the client, and then work for other people, too, and sell yourself an hour a day.”

“Now, I’m sure just being a successful lawyer would be plenty for many people. But if you aren’t satisfied with your current situation, why not work for yourself an hour each day? Instead of just idle dreaming, set aside specific time for action.”

“I have always wanted to improve what I do, even if it reduces my income in any given year. And I always set aside time so I can play my own self-amusement and improvement game.”

Here are two great pieces of advice on the subject from Charlie Munger:

“Develop into a lifelong self-learner through voracious reading; cultivate curiosity and strive to become a little wiser every day.”

“Go to bed smarter than when you woke up.”

“I just sit in my office and read all day.”

5. Treat your body like you’d treat your car… if it was the only car you were ever going to own

When giving advice to young adults, Warren Buffett often speaks about the fable of the genie:

“When I was sixteen, I had just two things on my mind – girls and cars,” Buffett would say. “I wasn’t very good with girls. So I thought about cars. I thought about girls, too, but I had more luck with cars.

Let’s say that when I turned sixteen, a genie had appeared to me. And that genie said,‘Warren, I’m going to give you the car of your choice. It’ll be here tomorrow morning with a big bow tied on it. Brand-new. And it’s all yours.’

Having heard all the genie stories, I would say, ‘What’s the catch?’ And the genie would answer, ‘There’s only one catch. This is the last car you’re ever going to get in your life. So it’s got to last a lifetime.’

If that had happened I would have picked out that car. But, can you imagine knowing it had to last a lifetime, what I would do with it? I would read the manual about five times. I would always keep it garaged. If there was the least little dent or scratch, I’d have it fixed right away because I wouldn’t want it rusting. I would baby that car, because it would have to last a lifetime.

That’s exactly the position you are in concerning your mind and body. You only get one mind and one body. And it’s got to last a lifetime. Now, it’s very easy to let them ride for many years. But if you don’t take care of that mind and that body, they’ll be a wreck forty years later, just like the car would be.

It’s what you do right now, today, that determines how your mind and body will operate ten, twenty, and thirty years from now.”

6. Pretend that you only have a “20 slot punch card” for financial decisions

Here’s another analogy from Warren Buffett:

“Big opportunities in life have to be seized. We don’t do very many things, but when we get the chance to do something that’s right and big, we’ve got to do it. And even to do it in a small scale is just as big of a mistake almost as not doing it at all. I mean, you really got to grab them when they come. Because you’re not going to get 500 great opportunities.

You would be better off if… you got a punch card with 20 punches on it. And every financial decision you made you used up a punch. You’d get very rich, because you’d think through very hard each one. I mean if you went to a cocktail party and somebody talked about a company and they didn’t even understand what they did or couldn’t pronounce the name but they made some money last week in another one like it, you wouldn’t buy it if you only had 20 punches on that card.

There’s a temptation to dabble – particularly during bull markets – and in stocks it’s so easy. It’s easier now than ever because you can do it online. You know you just click it in and maybe it goes up a point and you get excited about that and you buy another one the next day and so on. You can’t make any money over time doing that.

But if you had a punch card with only 20 punches, and you weren’t going to get another one the rest of your life, you would think a long time before every investment decision– and you would make good ones and you’d make big ones. And you probably wouldn’t even use all 20 punches in your lifetime. But you wouldn’t need to.”

7. Develop your own “Inner Scorecard”

Finally, Warren Buffett says that we shouldn’t care what the world thinks. You need to develop you own internal motivations, or an “Inner Scorecard”:

If all the emphasis is on what the world’s going to think about you, forgetting about how you really behave, you’ll wind up with an Outer Scorecard.”

Tap Dancing to Work: Warren Buffett on Practically Everything, 1966-2013

Loomis has collected and updated the best Buffett articles Fortune published between 1966 and 2012, providing commentary about each major arti­cle that supplies context and her own informed point of view. Readers will gain fresh insights into Warren Buffett’s investment strategies and his thinking on management, philanthropy, public policy, and even parenting. 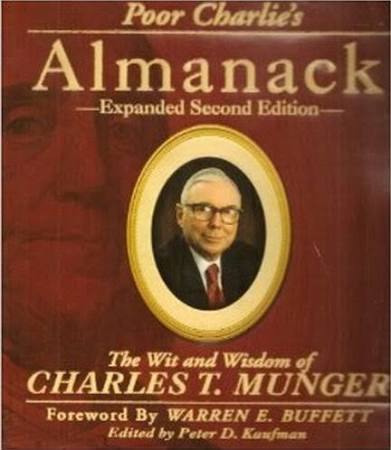 The early pages cover Charlie Munger’s family history and his framework for investing. The next section, assembled by leading investor Whitney Tilson, is well edited and benefits from Tilson’s massaging of quotations made over time into logical sub-headings. The bulk of the text though is, as the subtitle suggests, the wit and wisdom of Charlie Munger as conveyed through various speeches over the last several decades.