This article was originally published on GuruFocus.com by Nicholas McCullum.

Warren Buffett is arguably the most famous (and most successful) investor of all time.

Unfortunately, Buffett’s tenure with Berkshire Hathaway will come to an end one day as he is currently 86 years old.

In a recent Bloomberg interview, Buffett said that if he were to die tomorrow, Berkshire’s board would know “exactly who to put” as CEO and Buffett’s son, Howard, would become the company’s non-executive chairman.

While a succession plan appears to be in place, there has been much speculation about the future of Berkshire once Buffett is no longer at the helm. One of the possibilities is breaking up the company’s various operating units into individual corporate entities.

This post will analyze the possibility of a Berkshire breakup in detail.

Berkshire Hathaway is a diversified conglomerate with literally hundreds of operating subsidiaries. For reporting purposes, here is how Berkshire divides the company:

Berkshire has a relatively unique capital structure. The company has two classes of common stock, with the Class A stock having the highest market price I have ever seen.

Each share of Class A common stock is convertible at the option of the holder into 1,500 shares of Class B common stock.

At prevailing market prices, this option turns a Class A share into Class B stock worth $259,230 – indicating there is minimal inefficiency between the two classes of Berkshire stock.

Berkshire’s decentralized management structure is very unique and unlike any other I have seen among publicly traded companies. Remarkably, only a very small portion of Berkshire’s employees operate at corporate headquarters. In Berkshire Hathaway’s 2016 Annual Report, Buffett said:

“Though Berkshire has about 367,000 employees, only 25 of these are at headquarters.”

This would not be possible without strong leadership at the helm of each operating company.

Time and time again, Buffett has written and spoken on the importance of hiring high-quality individuals to lead the company’s subsidiaries.

“Having first-rate people on the team is more important than designing hierarchies and clarifying who reports to whom.”
“Somebody once said that in looking for people to hire, you look for three qualities: integrity, intelligence and energy. And if you don’t have the first, the other two will kill you. You think about it; it’s true. If you hire somebody without [integrity], you really want them to be dumb and lazy.”

Berkshire’s decentralized management structure and strong middle management are two reasons why investors have speculated on the possibility of spinoffs after Buffett’s departure.

Competent management means investors can have faith that spun-off entities will still maintain their competitive advantages and earn strong returns on invested capital, even in the absence of Buffett.

To determine whether or not Berkshire Hathaway will be broken up after Buffett’s departure as CEO, it will help to examine historical cases of large businesses being broken into smaller entities.

There are two main examples of this: Bell System and Standard Oil.

The Bell breakup, which was effective Jan. 1, 1984, occurred when the Bell group of companies was spun off into seven separate “Regional Holding Companies”:

Some of these companies eventually transformed into AT&T (NYSE:T) and Verizon (NYSE:VZ), which still exist today.

The reason Bell was broken up was because of the monopoly its predecessor had over the telephone industry.

Since there were no real competitors in the space, the previous company had complete control over the telephone market, which was believed to be hurting consumers. The split up was instigated when the U.S. Department of Justice filed an antitrust lawsuit in 1974.

By employing aggressive pricing practicings and economies of scale to undercut competitors and push them out of business, Standard Oil soon became one of the world’s first multinational corporations and enjoyed a monopoly in the oil industry.

The U.S. Supreme Court recognized this and ruled Standard Oil be split into 34 smaller companies in 1911. When this occurred, Rockefeller became one of the richest men ever as the aggregate income from the Standard Oil spinoffs proved to be much larger than the predecessor company.

Both of these examples are unlike the current Berkshire Hathaway because Berkshire is so diversified. It does not have a monopoly, unlike Standard Oil and Bell, which means regulators have no need to raise antitrust concerns with Berkshire’s management.

A Berkshire Hathaway corporate breakup would be aimed at unlocking shareholder value rather than addressing monopoly concerns.

A visual snapshot of Berkshire’s current business model based on net earnings can be seen below. 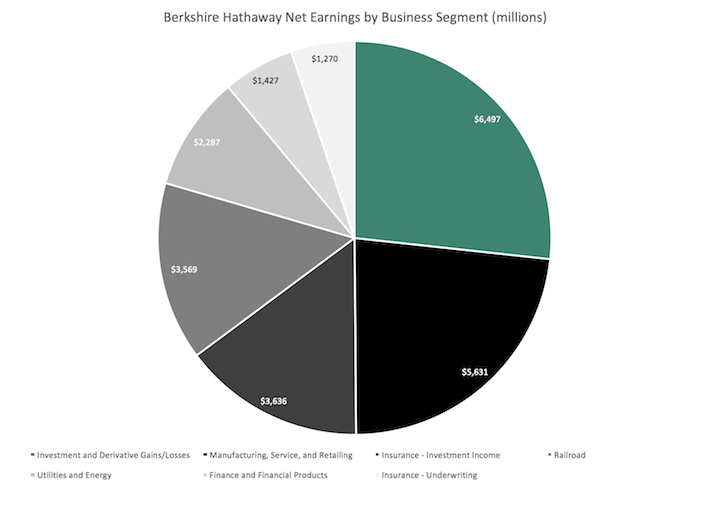 Based on the earnings distribution presented above, I believe it would make the most sense for Berkshire to be split into the following units:

Each of these potential spinoffs will be discussed in detail below.

This unit would be Berkshire Hathaway’s largest successor by far. As such, I believe it would make sense for this unit to retain the company’s name after any business restructuring.

The holdings of this entity would include:

Performing a valuation analysis on the spun-off FinanceCo is relatively straightforward. We can compare the segment’s earnings to peers from the insurance and finance industry.

Here is a list of large-cap insurance and financial companies along with their price-earnings (P/E) ratios.

Taking the average price-earnings ratio of the above companies gives a valuation multiple of 15.7.

From an earnings perspective, FinanceCo would have ownership of the following Berkshire Hathaway earnings segments:

For an aggregate earnings power of $12.8 billion. Multiplying this by the average valuation of the comparison companies listed above gives an estimated market value of $201 billion for FinanceCo.

Alternatively, Berkshire Hathaway could spin off only its insurance operations and perform a corporate inversion where Berkshire shareholders receive the company’s common stock holdings as a special, one-time dividend.

This is similar to an event earlier in Buffett’s career involving a company called Sanborn Map.

Buffett invested in this producer of commercial maps because of its portfolio of high-quality, undervalued securities – not because of its mapmaking business. Buffett’s goal was to unlock value for Sanborn’s shareholders.

After much back-and-forth with the company’s management and board of directors, Buffett succeeded by exchanging the company’s common stock for a proportionate amount of Sanborn’s investment portfolio (which was worth far more).

More details about this corporate inversion can be seen below.

“About 72% of the Sanborn stock, involving 50% of the 1,600 stockholders, was exchanged for portfolio securities at fair value. The map business was left with over $1.25 million in government and municipal bonds as a reserve fund, and a potential corporate capital gains tax of over $1 million was eliminated. The remaining stockholders were left with a slightly improved asset value, substantially higher earnings per share and an increased dividend rate.”

It is much more difficult to estimate the shareholder value of this type of corporate event. Further, the tax implications of this corporate action would be highly complex.

For simplicity’s sake, this analysis assumes a spinoff of Berkshire’s insurance and finance operations to be worth around $200 billion, as measured by the market valuations of comparable companies.

The company owns a large power and utility business that operates under the name Berkshire Hathaway Energy. In fiscal 2016, these businesses generated net income of $2.3 billion.

This business is very similar to certain other publicly traded companies and, if spun off, would likely carry a similar valuation.

Here is a list of other large-cap utility companies along with their price-earnings ratio.

The average of the above P/E ratios is 19. Based on Berkshire Energy’s 2016 net income of $2.3 billion, the spun-off company would be valued at around $44 billion if it generated the average valuation of the above peer group.

BNSF was acquired by Berkshire Hathaway in 2010 in a cash-and-stock deal worth $44 billion. At the time, Berkshire already owned 23% of the publicly traded BNSF security.

It is reasonable to expect the spun-off BNSF would carry a similar valuation to the other Class 1 railroads in North America.

Other large-cap Class 1 railway companies (along with their P/E ratios) include:

The average of the above valuations is a P/E ratio of 21.3. Based on BSNF’s 2016 net income of $3.6 billion, I would expect the spun-off entity to have a market capitalization of around $77 billion.

Of all of the hypothetical spinoffs discussed in this analysis, ServiceCo would have the highest degree of operational diversity.

Current Berkshire Hathaway operating businesses that would be spun off with ServiceCo include: 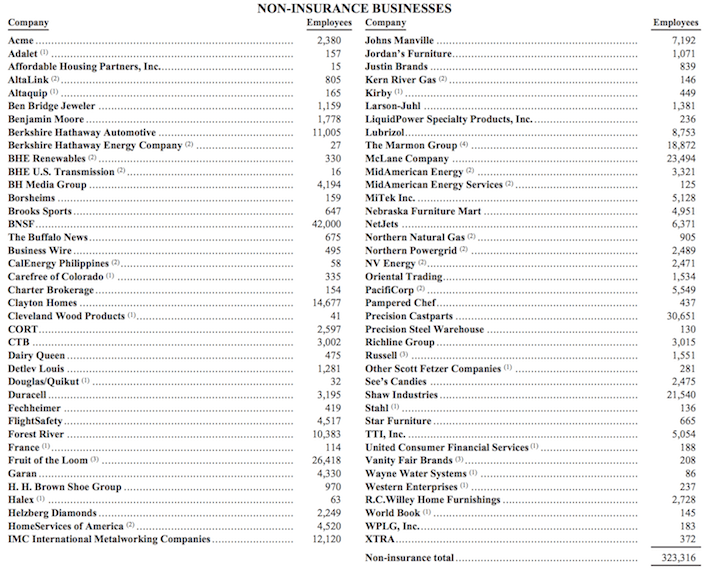 Most notably, this operating unit would certainly contain Precision Castparts (PCP), an aerospace equipment manufacturer that Berkshire purchased for $37 billion in 2015.

Since this business unit contains so much inherent diversification, it is a bit trickier to value than some of the hypothetical units discussed previously. Here are some proxies for the purpose of valuation:

The average of the above valuation multiples is 26.4. This segment’s 2016 net income of $5.6 billion leads me to estimate a spun-off market capitalization of around $145 billion.

Adding up the estimated market values for the spun-off entities outlined above gives an aggregate value of $466 billion, which compares positively to Berkshire’s current $425 billion market capitalization.

This analysis, however, is very assumptive in nature. Various assumptions have been made (particularly surrounding the valuation of the spun-off companies) that may or may not be accurate in reality.

Further, there are two big qualitative reasons why I believe Berkshire will not be broken up after Buffett is gone.

First, there are no antitrust concerns to instigate intervention from regulators. Although Berkshire is a massive company, it operates in so many different industries that it still has plenty of room to grow before it approaches monopoly territory.

The second reason is centered on the benefits of the current Berkshire model. Berkshire is currently a very efficient company with minimal selling, general and administrative costs.

The company also seriously benefits from its operational diversification. When certain sectors are in a recession, Berkshire can operate in a counter-cyclical manner and divert funds from one of its many other businesses to pursue attractive (and value-enhancing) acquisitions.

This has been key to Berkshire’s growth so far.

Berkshire Beyond Buffett: The Enduring Value of Values

by Lawrence A. Cunningham

Berkshire Hathaway, the massive conglomerate that Warren Buffett built, is among the world’s largest and most famous corporations. Yet, for all its power and celebrity, few people understand Berkshire, and many assume it cannot survive without Buffett. This book challenges that assumption.

In a comprehensive portrait of the corporate culture that unites Berkshire’s subsidiaries, Lawrence Cunningham unearths the traits that assure the conglomerate’s perpetual prosperity. Riveting stories of each subsidiary’s origins, triumphs, and journey to Berkshire reveal how managers generate economic value from intangibles like thrift, integrity, entrepreneurship, autonomy, and a sense of permanence.

Berkshire Beyond Buffett explores not only what will happen to Berkshire after Buffett, but presents all of Berkshire behind Buffett, the inspiring managerial luminaries, innovative entrepreneurs, and devotees of deep values that define this esteemed organization.